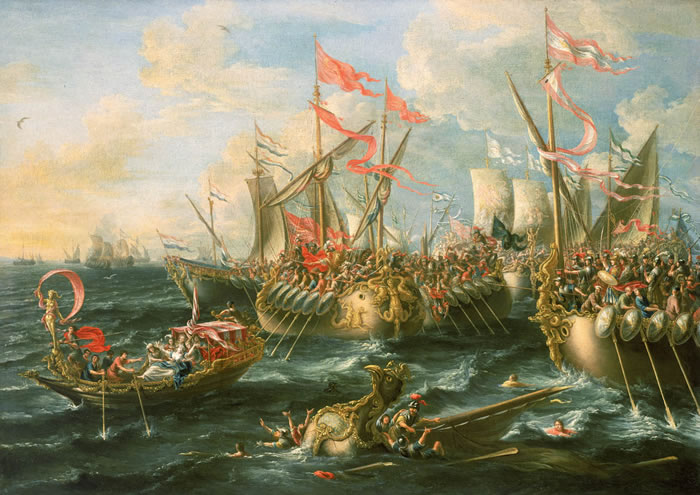 Battle of Actium 2 September 31 BC

A Song of Victory
1 O give thanks to the Lord, for he is good;
his steadfast love endures for ever!

19 Open to me the gates of righteousness,
that I may enter through them
and give thanks to the Lord.
20 This is the gate of the Lord;
the righteous shall enter through it.
21 I thank you that you have answered me
and have become my salvation.
22 The stone that the builders rejected
has become the chief cornerstone.
23 This is the Lord’s doing;
it is marvellous in our eyes.
24 This is the day that the Lord has made;
let us rejoice and be glad in it.*
25 Save us, we beseech you, O Lord!
O Lord, we beseech you, give us success!
26 Blessed is the one who comes in the name of the Lord.*
We bless you from the house of the Lord.
27 The Lord is God,
and he has given us light.
Bind the festal procession with branches,
up to the horns of the altar.*
28 You are my God, and I will give thanks to you;
you are my God, I will extol you.
29 O give thanks to the Lord, for he is good,
for his steadfast love endures for ever.

21When they had come near Jerusalem and had reached Bethphage, at the Mount of Olives, Jesus sent two disciples, 2saying to them, ‘Go into the village ahead of you, and immediately you will find a donkey tied, and a colt with her; untie them and bring them to me. 3If anyone says anything to you, just say this, “The Lord needs them.” And he will send them immediately.*’ 4This took place to fulfil what had been spoken through the prophet, saying,
5 ‘Tell the daughter of Zion,
Look, your king is coming to you,
humble, and mounted on a donkey,
and on a colt, the foal of a donkey.’
6The disciples went and did as Jesus had directed them; 7they brought the donkey and the colt, and put their cloaks on them, and he sat on them. 8A very large crowd* spread their cloaks on the road, and others cut branches from the trees and spread them on the road. 9The crowds that went ahead of him and that followed were shouting,
‘Hosanna to the Son of David!
Blessed is the one who comes in the name of the Lord!
Hosanna in the highest heaven!’
10When he entered Jerusalem, the whole city was in turmoil, asking, ‘Who is this?’ 11The crowds were saying, ‘This is the prophet Jesus from Nazareth in Galilee.’

The Palm Sunday story is well known to probably all of us. The people are hugely excited. They are celebrating good news. Jesus the king has arrived in the capital city – Jerusalem – the place God chose for siting the temple, the centre of power, faith and worship in Israel.

Good News – or Gospel. We talk about it as though we know what it means but let’s see what good news meant in the time of Jesus.

[1]NT Wright gives a great illustration of how to understand good news, and he uses an example from history.

After Julius Caesar was assassinated in 44 BC, a power struggle developed between his adopted son Octavian and Mark Antony (famous as Cleopatra’s lover).  13 years later in 31 BC Octavian finally defeated Antony in a huge sea battle – the Battle of Actium. Antony and Cleopatra committed suicide and the way was open for Octavian to be the first proper Caesar of the Roman Empire.

Now if you were living in Rome and were a supporter of Octavian’s this was good news! Your man had become the single ruler of the known world. The good news is about something that has just happened.

The main battle was won and Octavian (who later was called Augustus Caesar) would bring peace, justice and prosperity.

However, Octavian still had to consolidate his victory, especially in Egypt. There were still quite a few mopping up operations to take place. He would then return to Rome in triumphal procession. So good news also meant something that would happen.

As a supporter of Octavian everything would look different. You would prepare to celebrate and plan a new life. In fact your entire outlook on things would be different, positive, joyful.

Antony’s supporters were in a bit of a pickle. Many fled, some pretended to co-operate, but one notable man, Herod the Great, powerful overlord of the Jewish homeland, reacted differently. He went straight to Octavian and confessed.  “Think of what a loyal supporter I have been to Antony. If you keep me in power, imagine how loyal I would be to you!” His approach worked! For Herod, the news of what had just happened and what was going to happen created a challenge. The situation called for new decisions.

Now, NT Wright does not select this example at random. Roman emperors regularly used the term good news to describe what they had already achieved and what life would be like as a consequence.

The Christians knowingly used this language in a similar way. Something had happened because of which everything was now different, and something would happen that would complete this initial victory.

Jesus was born in the time of Octavian (i.e. the Emperor Augustus) when Herod the Great ruled the Middle East.  He died when Tiberius (Augustus’s successor) was emperor and when one of Herod’s sons, Antipas was the local ruler.

Jesus was born in real time in a real place. And his message was not about escaping to heaven, it was about transforming real people in a real world.

Now here’s the thing. Jesus was a Jew, an Israelite of the tribe of Judah. His ministry was a logical continuation of the ministry God had been setting up through the nation of Israel.

God, beginning with Abraham and his descendants moulded a people whose mission was to restore the world from its headlong flight away from God. The main task was to fall on the shoulders of a figure whom they referred to as “the anointed one” – the Messiah (in Greek, the Christ). Jesus completely identified with the Messiah.

You might remember the risen Jesus on the road to Emmaus, talking to two disciples who were confused. In Luke 24 we read,  25Then he said to them, ‘Oh, how foolish you are, and how slow of heart to believe all that the prophets have declared! 26Was it not necessary that the Messiah* should suffer these things and then enter into his glory?’ 27Then beginning with Moses and all the prophets, he interpreted to them the things about himself in all the scriptures.

The good news experienced by the people on the first Palm Sunday – those Jewish disciples – was the first sputtering sign that victory was on its way. Not just for them but for the whole of creation which God would restore.

Jesus’ death, only a few short days later, and his resurrection, three days after that, were like the great sea battle Octavian fought against Antony.

So when the Apostle Paul went round the Roman Empire shouting the good news, he was not saying, “Yay! We’re going to heaven.” He was saying, “God by way of his Messiah, has invaded earth and has won the great battle. On the cross he has defeated the powers of darkness. In the resurrection he’s given death its marching orders.” Very real, practical victory has come to earth.

You see the Gospel – the good news – is just that – it’s not good advice, it’s not a pious religious philosophy. It’s shouting out loud, “God is on the move! He has won the major victory! Something has just happened!”

When the crowds were placing their cloaks on the ground for Jesus’ donkey to walk on, waving palm branches and shouting:

… we read in Luke 19: 39But some of the Pharisees in the crowd said to Him, “Teacher, rebuke Your disciples!” Is it any wonder Jesus replied, 40“I tell you, He answered, “if they remain silent, the very stones will cry out.”

The good news is not about ‘pie in the sky by and by’. It is visceral, sweat and blood stuff. It is about a victory in battle: an initial and telling victory over the powers of darkness, who, taking advantage of sin, have sought to visit misery and death upon humankind.

So where are we in this?

As followers of the Christ (Jesus the Messiah) we are poised between something that has just happened (Jesus’ life, death and resurrection) and something that will happen (Jesus’ return to earth in triumph.)

As supporters of Jesus everything looks different. We celebrate a new life. Our entire outlook on things is different, positive, joyful.

Those who supported the enemy would be wise to confess and change their loyalty to the new victor.

Now this is the good news! When the crowds in Jerusalem celebrated Jesus’ entry into the city of God, their actions were prophetic. They were looking ahead. They may not have known that at the time, but Jesus still had to die, be raised from the dead, send the Holy Spirit, build the church and finally return to unite heaven and earth into the magnificent Kingdom of God.

Yes, we are to repent and accept Jesus as our saviour. Yes we are to look forward to heaven when we die. That’s all part of what we do in reaction to the good news that Jesus has defeated Satan on the cross and in the resurrection. But those are only part of the big picture. Salvation is so much more than just those things because God is so much more than our professional escape artist.

We are also to believe the good news.  God is the King! And with those early disciples and innocently joyous people in Jerusalem on that first Palm Sunday, we celebrate the victory of our Messiah, Jesus of Nazareth!

So celebrate. Enjoy the fact that God is for you; and what’s more, has a great deal more for you that is yet to come!

When Jesus begins his ministry with the words, ‘The time is fulfilled, and the kingdom of God has come near;* repent, and believe in the good news.’ We should ask ourselves what that means for us. The one thing you can’t do with stupendous good news, that will affect every nook and cranny of all existence, is ignore it. We really do ignore it at our peril.

What is our response to the Gospel – the Good news? Here are three possible responses:

Hosanna! The word means “Please save!”

Hence, more than anything, good news is a call for celebration. We can get together and rejoice in our good fortune. We can speak about exactly what it all means, sing songs of praise to our King Jesus and share a meal in his honour.

We can look forward to the resurrection of all Christians, to God’s redemption of all of his created order, to the unification of heaven and earth, to the descent of the New Jerusalem.

Now isn’t that a wonderful thing! Isn’t that a cause for celebration!

[1] NT Wright – Simply Christian, Why the Gospel is News and What Makes it Good (Harper Collins, New York: 2015)